The Devil’s Harvest is an upcoming Canadian epic romantic-drama film about the Ukrainian Holodomor famine-genocide of 1932-33.

The story, a dramatic tale of love and the importance of family tells about Yuri (Max Irons here our portrait, The White Queen, The Host, Red Riding Hood ), an artistic soul born into a family of Cossacks’ warriors, who struggles to win the approval of his grandfather Ivan (Terence Stamp, Song for Marion, Yes Man, The Adjustment Bureau ) and father Yaroslav (Barry Pepper, The Lone Ranger, To the Wonder, Flags of our Fathers), and to win the heart of Natalka (Samantha Barks, Les Misérables). He finds his life changed forever with the invasion of the Red Army, and the subsequent persecution of his family and fellow countrymen as Stalin’s regime of terror extends across Eastern Europe. In the cast also Tamer Hassan as the villain Sergei.

On October 16, 2013 also Aneurin Barnard joined the cast of the film, he plays Mykola, a young man growing up in rural Ukraine who finds his life changed forever by the invasion of the Red Army.

Max Irons (read here our portrait) and Aneurin Barnard worked together in The White Queen where Irons was King Edward IV and Barnard his brother Richard III alongside the other Londoner David Oakes as George Duke of Clarence.

The Devil’s Harvest is directed by George Mendeluk (The Kidnapping of the President).

Mendeluk said: “I grew up with my mother describing how she and her family survived the terror of the Holodymor (the engineered famine/genocide wrought by Stalin in Ukraine) where 7 million perished at a time when the world looked the other way. As you see in today’s media, his long shadow still affects Ukraine today, but our story is essentially one of love triumphing over all that life throws at it”.

Ian Ihnatowycz, who privately financed the film added: “We wanted to show a side of the period between the World Wars that has really been ignored, where the Ukrainian population was decimated by the Bolsheviks, and George rightfully wanted to use the experience of one disparate family as the core story.  We also decided on filming on authentic locations in Kiev, despite the attentions of factions who even today want this period of history suppressed.  I am relieved that the photography is now completed”.

In a recent interview for Red Carpet Tv, Tamer Hassan said: “It’s a true story, it’s a Romeo and Juliet story. It’s something that needed to be told but doing it it was really thoughtful because when you’re doing it , it’s not fun. Hopefully we did a good job. And I loved to play the villain”.

On Valentine’s evening, at Bafta nominee dinner, Samantha Barks said about working with Max Irons: “You gotta love Max. The film was so dark, but I don’t think I’ve ever laughed so much off-set. We got on instantly, which was lucky, as on our first day we had a love scene. I opened the schedule and went, ‘Argh!’ But you just have to dive straight in and not take yourself too seriously. It was funny, actually”.

Max Irons has shown in recent years to be a perfect heart-throb. On the big screen with The Host and Red Riding Hood. On Tv with The White Queen and The Runaway. On stage with Farragut North (here our review) and even in a short movie as Unrequited Love. For sure he will be also a perfect heart-throb in the  upcoming movie Posh alongside young Londoner actors as Sam Claflin, Freddie Fox, Simon Reid (now with Oliver Jackson-Cohen and Rebecca Ferguson on Despite the Falling Snow set in Serbia) and Douglas Booth.

The DeviI’s Harvest filming  was started in the mid-October in Romania and Ukraine.

On November 15, 2013 the shooting was underway in Ukraine and on February 5, 2014 Variety told that the shooting of the epic romantic film has just wrapped in Kiev, Ukraine.

After some shooting in London, the movie is now in post-production.

There aren’t release dates yet. 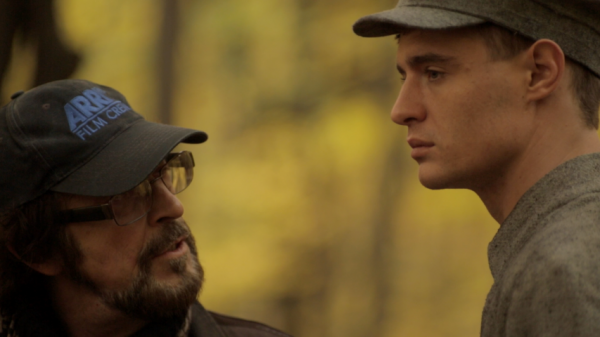